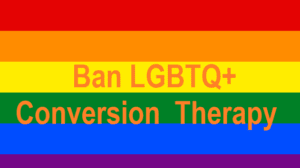 Conversion therapy in America is a problem that has been ignored for far too long and if left to fester, will continue to harm millions of LGBTQ+ children nationwide.

What is Conversion Therapy?

While conversion therapy varies in practice, ranging from physical adverse conditioning to blatant shaming, the lack of scientific proof backing up the usefulness of these practices as well as the long-lasting negative effects are still the same.

Conversion therapy is usually forced onto LGBTQ+ minors by their legal guardians. Studies have shown that children being mistreated for identifying as LGBTQ+ are:

6 times more likely to have reported high levels of depression.

and 3 times as likely to be at a high risk for HIV and STDS compared to most other children or teenagers their age.

The Substance Abuse and Mental Health Services Administration also calls for the elimination of LGBTQ+ conversion therapy, having once stated

“Specifically, conversion therapy -efforts to change an individual’s sexual orientation, gender identity, or gender expression – is a practice that is not supported by credible evidence and has been disavowed by behavioral health experts and associations. Conversion therapy perpetuates outdated views of gender roles and identities as well as the negative stereotype that being a sexual or gender minority or identifying as LGBTQ is an abnormal aspect of human development. Most importantly, it may put young people at risk of serious harm.”